I am enthralled with Molly Millions, the most intriguing character in William Gibson’s Sprawl Trilogy of cyberpunk books which includes the ground-breaking novel Neuromancer (1984). Molly is a street fighter for hire who goes by many names and has augmented her body to fits her deadly profession. Her eyes are surgically inserted mirrored lenses that enhance her vision and her fingernails are four centimeter retractable scalpel blades. Molly does what she needs to do to get by.

In a cyber/world populated by male characters, many of whom have been subjected to involuntary augmentation with damaging psychological and physical impacts, she is a cyborg who’s in control. She makes her own decisions about the integrity and autonomy of her consciousness and corporeality – and she’s very clear about this to others who might want to control her.  Upon meeting (and capturing) the anti-hero of Neuromancer, Henry Case, she tells him, ‘you try to fuck around with me, you’ll be taking one of the stupidest chances of your life.’

Neuromancer is a prescient work. It reflects and extends on hacker culture and presents a future where humans and machines merge. Humans have direct neural interface with the ‘matrix’, which is described as a vast democratised  ‘Cyberspace. A consensual hallucination experienced daily by billions of legitimate operators, in every nation, by children being taught mathematical concepts…A graphic representation of data abstracted from the banks of every computer in the human system. Unthinkable complexity. Lines of light ranged in the nonspace of the mind, clusters and constellations of data. Like city lights receding…’ On death, a person’s consciousness can be uploaded to the matrix and ‘live’ on. AI has achieved a cunning consciousness and can roam and manipulate the Matrix for their own ends. Augmented humans directly insert ‘microsofts’, fragments of data-filled silicon into sockets behind their ear so they can trance out.

And then there is the fascinating co-human-machine interface device called a ‘simstim’ (Simulation/Stimulation) which allows one person to have direct access to another person’s bodily experience in real time or through a recording, without jacking out of the matrix. The simstim is described as ‘a multiplication of flesh input’. It is used as an entertainment device to enable a person to occupy the flesh of their favourite entertainer, and a one-way form of communication between people. If a person is using the simstim they can see, smell, feel and hear what another person is feeling but, importantly, they do not have access to their private thoughts. Gibson describes what it’s like to ‘flip’ in to another’s flesh using the simstim:

‘The abrupt jolt into another flesh. Matrix gone, a wave of sound and colour…For a few frightened seconds he fought helplessly to control her body. Then he willed himself into passivity, became the passenger behind her eyes.’

Molly knows when Case has ‘flipped’ into her body via the simstim. In one episode another character senses she has a ‘rider’ in her flesh, and Molly tells Case to get out so that she can maintain the privacy of the transaction is making. Only the cunning AI of the novel can manipulate the simstim to communicate with Case but it doesn’t seem to affect Molly.

The simstim represents more than a clever sci-fi invention. It is a device that allows the main character to understand the embodied experience of the Other. Otherness is a relational category – it’s someone or a group of someone’s who are considered different from the self.  Otherness is set against normative ideas about what is considered a good or right or normal self. Otherness relies on socially constructed oppositions between two categories of things and their chain of associations. The Other is different from the dominant but also defines the dominant in terms of what it is not. Othering is about the historical and sociocultural power of certain groups to define and categorise what the Other is, often in ways that are restrictive or harmful and not reflective of actual or diverse experiences of Others. The seminal work of Simone de Beauvoir’s describes how gender is constituted through the dynamic of Otherness:

‘Thus humanity is male and man defines woman not in herself but as relative to him; she is not regarded as an autonomous being. . . She is defined and differentiated with reference to man and not he with reference to her; she is the incidental, the inessential as opposed to the essential. He is the Subject, he is the Absolute—she is the Other (The Second Sex, 1974, xvii–xix).

The simstim device allows the male character of Case to experience Molly’s female cyborg corporeality in its glory. Her way of being in the world is so different from his that he never gets used to it.

The ability to occupy the Other is currently held out as one of the great hopes of immersive virtual reality which has been promoted as an ‘empathy machine’. This involves experiencing the world through the virtual eyes and flesh of the Other using applications that allow someone to see themselves as a different gender or ethnic identity or at a different age. Interacting in virtual environments as the Other, a body swap illusion, is said to alter personal bias (as least measured in the short term). Could this nascent version of the simstim make us more empathetic and more likely to moderate our biases and challenge racist,  sexist or ablest beliefs?

While research on measuring immersive VR body swap experiences, empathy and belief change is ongoing, the area raises issues about how the idea of the Other (the group to be understood or empathised with) are initially understood and defined and how their ‘experiences’ are translated into VR applications. Who gets to decide which Others need to be known and how they will be known? What aspects of Otherness will be made visible and intelligible through the affordances of the technology? What is the role of the Other in deciding on and designing these aspects of a VR experience (for groups of Others can display diversity of life history and experience)?

Even though Molly Millions is interfacing with Case he only has access to certain aspects of her corporeality as a woman. He has no control over her way of moving, feeling, interacting or generally being in the world (and as a man, he finds this psychically and physically uncomfortable). Molly initially decides whether he will be equipped to access her body. She tells him to get out when she has enough. He cannot know her private thoughts. In the world of Neuromancer, Case is not an Absolute figure and Molly is not incidental or subject to him. She is an agent exercising control in her own right within the constraints of a dystopian world.

Case ‘experiences’ Molly on her own terms as she maintains control of her bodily integrity and autonomy, and this is the lesson for any virtual experience that involves embodied swapping experiences in immersive VR.

Feminism has long held to (and debated) the idea of bodily integrity and autonomy. As a social movement it continues to rail against the notion of woman’s body as property, and champions reproductive rights and freedom from objectification and violence. Barbara Kruger’s art (below) encapsulates the spirit of this ongoing fight. 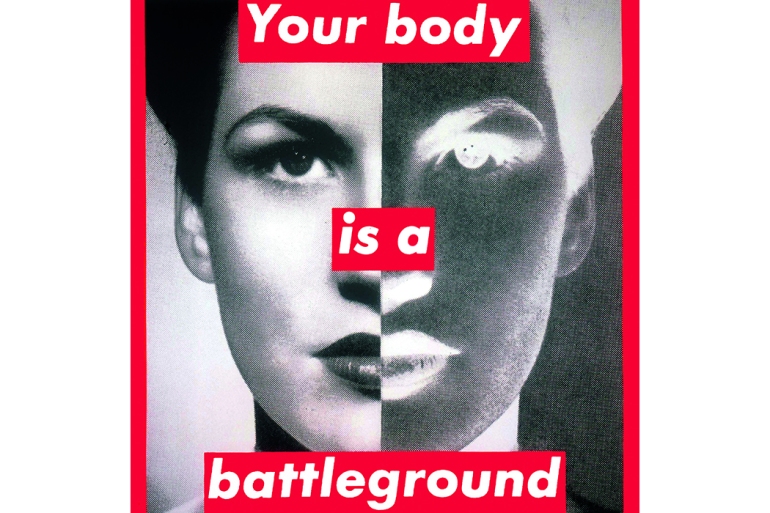 Bodily integrity and autonomy is key to human rights frameworks and ethical reasoning. Bodily integrity is ‘the inviolability of the physical body and emphasizes the importance of personal autonomy and the self-determination of human beings over their own bodies. In the field of human rights, violation of the bodily integrity of another is regarded as an unethical infringement, intrusive, and possibly criminal.’ The European Union Charter of Fundamental Rights (Article 3 – Dignity) upholds that ‘Everyone has the right to respect for his or her physical and mental integrity.’ Children too have a right to ‘autonomy and self-determination over their own body.’ In many nations the right of an individual to control his or her own body is deeply rooted in history, tradition and law.  Philosopher Martha Nussbaum identifies bodily integrity as a core capability of justice which includes being able to freely move from place to place; to be secure against assault, including sexual assault and domestic violence; having opportunities for sexual satisfaction; and for choice in matters of reproduction.

Although there are ‘hard cases’, such as feminist debates on pornography and sex work and contestation around access to abortion or euthanasia, the right to bodily integrity and autonomy remains a persistent principle in the realms of social justice and ethics.

A key reason Molly maintains her bodily integrity and autonomy is that the simstim does not allow anyone to access her brain. Case cannot access the flow of her private thoughts, memories and associations of consciousness.  Molly chooses to share the sensations of her corporeality through the simstim but she is sparing in revealing her motivations, her past experiences and her hopes. When she does choose to share these, they are a revelation to Case and the reader. Just as there is a visceral intimacy to the descriptions of Case feeling Molly’s body in action, there is intense power in Molly’s selective disclosure of what she has needed to do in the past to become a cyborg – a power to disclose which is exercised wholly by Molly.

This integration of body and brain, (not as separate entities in the Cartesian sense but as the woven fabric of who are), is a fundamental to respectful sociality. In other words, interaction which maintains the dignity of self and Others involves humble engagement with the whole of a person and in many cases their culture and communities, not just their individual parts or bits. An important element of this engagement, and perhaps one of our must profound opportunities for human learning, is the encounter with an Other when they choose to reveal something of themselves in all their embodied and subjective complexity.

As reports about brain-computer interfaces (BCI) and virtual reality, and BCI and artificial intelligence emerge, a raft of serious ethical questions about the right to bodily integrity and autonomy need to be asked, loudly and persistently. The conversation needs to include but go well beyond the maintenance of privacy and biometric data and reassurances to the public about engineered solutions to prevent their conscious and unconscious thoughts from bring hacked or scraped.

Humans learn immense lessons about the self and other from the social and cultural complications of disclosure.

These moments of disclosure profoundly effect our sense of self and Other. Dialogue needs to encompass what a loss of the right to  disclose will cost us as humans, even if we are, like Molly augmented in some way.

Freedom is the project of maintaining the integrity of bodies and brains as an integrated fabric of the self – with respect and dignity. It is the ability to resist the unwanted occupation of body and brain and the potential confines of limiting categories of self as defined by other people. Even as cyborgs we should retain the right to decide what knowledge of self, group and culture to share and this is not for other people to determine this for us. This is especially vital for the Others amongst us who, like Molly Millions, continue to fight long and hard for self-determination.

At the end of their adventures in Neuromancer, Molly leaves Case. He finds a note which says, “Hey its Ok but its taking the edge off my game.’ The novel’s last sentence reads, “He never saw Molly again.’

This is Molly’s choice. Her body. Her life. Her past, present and destiny.

Insert image: Barbara Kruger,  Your body is a battleground, https://daily.jstor.org/the-history-your-body-is-a-battleground/